My eyelids fluttered open, and I paused to take stock of my upper body. Throat? All good, actually. Nose? Still a little stuffy, but I could breathe through it. A significant improvement. Head? Much less sinus pressure and fog. Final assessment? Feeling about 70%. I checked my phone for the time. 11:30 a.m. Time to climb out of bed. I stretched once more before sweeping the covers off, swinging my legs over the edge, and finally stepping into the day.

Sleeping so late felt decadent, even if it was a healing sleep. I noted my gratitude for the significant improvement in my well-feeling, that it was only a case of severe allergies knocked out with medicine and sleep and not some lingering summer cold that would plague my last few weeks of carefree days before the start of the next semester.

I wasn’t sure what triggered it, perhaps being run down from the weekend of fun, but I was sure glad it was over. And if that was the cost, I was happy to pay it.

Fast forward a few days, and it’s now another Friday. I didn’t want to let the whole week slip by without checking in after last week’s post. Aside from being out of the game Monday with the mounting allergy attack and half the day Tuesday in bed recovering, it’s been a great week. It’s National Smile Week, after all! And “Smiling’s my favorite!” Here’s a recap of the 5 wonders of the week: 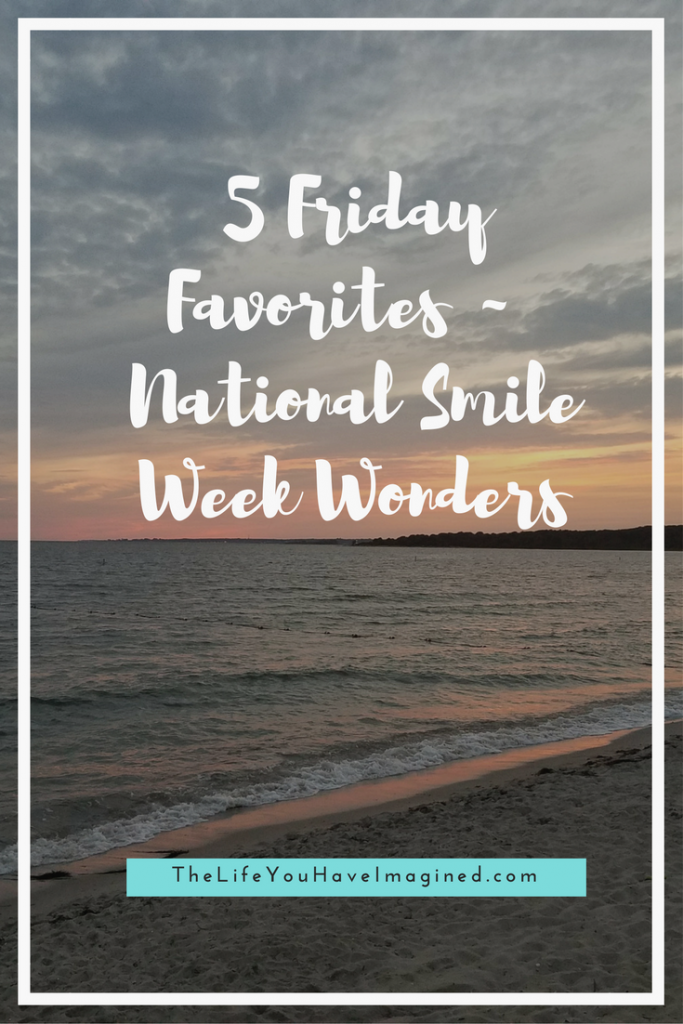 1. Friend Time: It started shortly after my last blog post on Friday. One of my girlfriends is having a birthday next week, and as a gift to herself, she made an appointment for some new ink. Another friend and I went along to keep her company while our guys hung out together. After lots of laughs, we joined back up for a late dinner and margaritas at our favorite Mexican place.

This was followed by some good friends’ annual summer bash on Saturday. There was delicious food, great music (he’s a DJ, afterall), a bouncy house slip and slide, drinks, games, and dancing until midnight (my favorite).

To wrap up the weekend, we joined some other friends at their family beach house on Sunday to enjoy dinner and good company, then took a 2-mile walk along the water’s edge to watch the sunset and moonrise. The weather was perfect and the moon almost full. What a great way to end the weekend!

2. Family Love: The second week of August is always a big one in my family. Both of my sisters celebrate birthdays, and my parents’ wedding anniversary falls right between them. It’s extra hard living so far away from them during times like this, but it’s also a great excuse to take time out to call and catch up with all of them in one week.

3. How Novel: After taking the first couple of days to get better, I spent the second part of the week away from the blog to actually work on my novel revisions. I got through a handful of chapters of line edits, both at home and out in the world, and will continue working on it today. It’s a bit tedious and takes time, but I’m more than halfway through now. My goal is to get them done by the end of next week so I can move onto more interesting/creative revision work.

4. Movie Madness: Last night we broke away from our weeknight routine and attended an outdoor movie screening at a friend’s house. Thursdays are such a great night for things like this because, if it’s a late night, there’s only one more early morning wake up before the weekend. The idea of the night was to watch an 80’s movie and see if it still held up as a good movie today, so we watched Romancing the Stone. There were seven of us watching, and we took a vote beforehand as to who thought it would hold. We were split three and three, with one person who’d never seen it. It was determined that he’d be the final verdict after watching it, and he voted… YES! It was a great night full of funny commentary a la Mystery Science Theater 3000, and we’ll be repeating it again next month with a new (old) flick.

5. Weather Wonderful: I need to take a minute just to say that the August weather up here has been pretty incredible. Sure, there’s been some rain, but the fact that it’s been in the upper 80s and sunny for several days but I haven’t had to turn on the A/C because the humidity hasn’t been stifling is nothing short of amazing. I just love having the windows and sliders open to the breezes and sounds of chirping in the woods outside my backdoor. Now if only the forecast would clear up for tomorrow. We have plans to paddle to our friend’s woody island cabin to celebrate her birthday and splash around in the lake all day!

If you saw the amazing video I shared on Facebook this morning, I hope you felt inspired. (If not, check it out.) As Mr. Carrey said, “Something inside you is always telling a story.” I hope you go out and live, create, and share your story this weekend and enjoy some more smiles while doing it!