It’s Friday. One week after the torch-lit procession at the University of Virginia in Charlottesville. Like so many others, I felt shaken by what happened last weekend. As I looked at the photos of the flame-illuminated faces coming out of the demonstration, the pit in my stomach grew in proportion to my shock.

As a general rule, society tends to move forward with each generation in terms of growing toward acceptance and equality. As they become adults, children move beyond the views of their parents to become their own persons with fewer tethers to antiquated ideas. We’ve seen the progression from slavery to civil war to emancipation to segregation to integration to Civil Rights Act to Voting Rights Act to African Americans in Congress to our first Black President.

We’ve seen progression on the women’s front and for LGBTQ+ rights, as well.

But when I looked at those photos, I felt chilled and disheartened by the number of young faces I saw standing together.

I AM AN ALLY, but I know first hand that I am not perfect and it isn’t always easy to see beyond what we’ve always been taught. Let me provide an example.

I’ve been an adjunct professor for thirteen years. As education continues to endure more and more budget cuts, full time professorship becomes harder and harder to obtain. Last summer, two positions opened at one of the schools where I teach, a community college in an ethnically diverse urban area. Most of the adjuncts applied. Rumors swirled that the school was hoping to hire either an Hispanic or African American teacher to better represent the student population and to serve as a role model and mentor. There was a lot of talk about it being unfair to adjuncts who’d been at the school for a long time. Being one of those adjuncts, it was hard not to fall into that trap after so many years of hard work and dedication without advancement.

One thing I think both of these examples have in common is that the world is actually a better place when we help raise everyone up to reach their highest potential rather than pin them down or threaten them. I find it disheartening that there is so much tension about everything these days. How often, in one day, do we see posts or tweets about dragging, shaming, or other bullying? We seem to forget even change is better enacted through love, support, and guidance, not ridicule, judging, and calling out.

What would the world be like if we were all the same? Would haters stop hating or would they just find something else to hate? What if one of those students, with the right role model and mentor, ended up being the next Langston Hughes or Gerrett A. Morgan, who invented the gas mask in the early 1900s so that firefighters could save lives without being overcome by smoke?

As a creative person, I sometimes feel extra sensitive to the tensions and hatred in the world. Although creative endeavors are often done in solitude, creatives generally love to promote community. They feel that need to connect deeply and must find ways outside of their work to do so, whether through living communities, groups, or events like First Friday.

That feeling of connection is why the most important place to fight hate is out in the community. Artists and activists often lead this charge. We need to come together, and we need to do it with love. Here are a few suggestions on how we can grow love rather than hate: 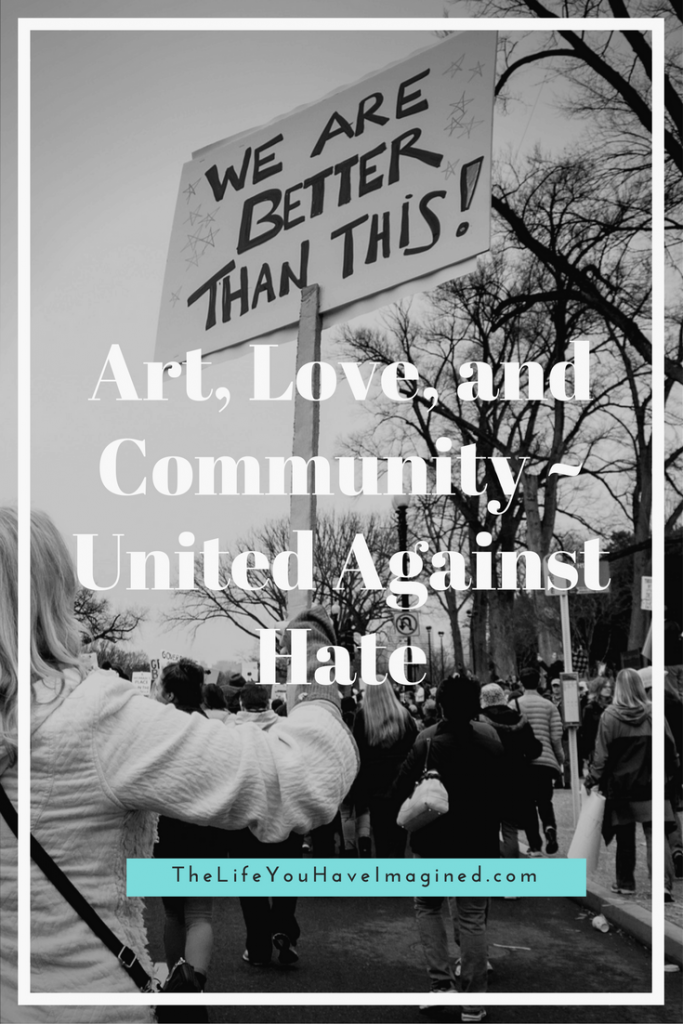 Want more details or need suggestions for reading? Check out these informative articles:

Feeling Hopeless After Charlottesville? 16 Ways You Can Make a Big Difference

25 Works of Poetry and Fiction for Anger and Action

One thought on “Art, Love, and Community ~ United Against Hate”